West needed to do all he could to get lucky the night he had this hand though there was no sign of that during the bidding.

Picking up this balanced 15 point hand: 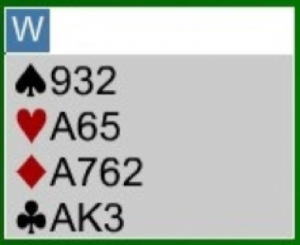 East bid Stayman and, after West denied a 4 card major, went on to bid 3NT. North lead the ♥3 and this is what West saw on the table:

With a combined 26 points, and 7 tricks off the top, making 3NT should be a piece of cake.

But… there are no long suits to develop, and only one finesse opportunity – to catch the ♠Q. If that worked then he should make all spade tricks but if not then it looked like he’d have to hope for a 3-3 break in one of the minors, and there was not a good chance of that happening.

Also North had lead hearts the suit where declarer had the most weakness. As one of the philosophers Nile Rodgers, Guy-Manuel de Homem-Christo, Pharrell Williams, or Thomas Bangalter observed “All ends with the beginnings”.

Following the Rule of 7 – the number of times you should duck a suit in NT is the number of cards you have in that suit (here 5) deducted from 7, so he ducked 2 times, to the King and Jack and was anyway forced to win the third heart trick with the Ace.

First difficult decision: what to discard from table on the third heart? Not a spade since he hoped to make 4 tricks in that suit. So a diamond or club then. But which? – the suits were very similar, both 7 cards total, split 3-4 and headed by AK. What would you pick? As Clint Eastwood said “you’ve got to ask yourself one question: ‚Do I feel lucky?‘ Well, do you, punk?”

In the end, maybe for the not very good reason than hoping the 9 he saw in clubs might have its legendary magic properties he discarded the ♦4.

OK, time to try the spades. To be on the safe side he first lead to the Ace on the table – just in case a singleton Queen was with an opponent – it would be so annoying to have that win. Then back to hand winning with the ♣A with twin objectives of being in the right place to finesse the ♠J and also to develop an eventual winner in clubs hopefully.

Time to get lucky, he lead a low spade and played the Jack on the table. It lost to the Queen. So not so lucky after all.

At this point in the game, South was on lead with these cards: 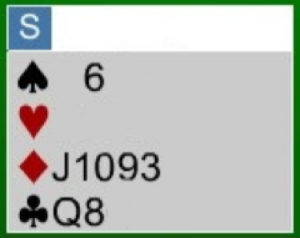 A spade did not look like a good idea and he had no hearts thanks to declarer’s double duck. Perhaps put off by the sight of the ♦K on the table he chose to lead the ♣8, though the Jack at the top-of-a-sequence in diamonds was surely screaming for his attention.

Well part of being lucky is having an opponent make a mistake for you. West went up with the ♣K and was interested to see North dropping the Jack. That could be good news he thought, maybe North is out of clubs now and can’t be reached to cash his 2 heart winners. Or South can be end-played. Or something.

Moving on, he cashed his 2 spade tricks on the table, dropping a club from hand. Then he played a club and prayed…

South holding just diamonds now had no option but to lead one. South won that in hand with the Ace, crossed to table with the ♦K and won the last trick in style with ♣9. Well that was good fun. 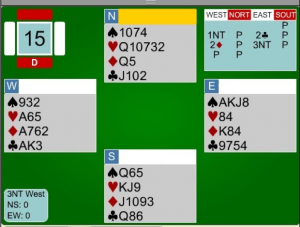