When the opponents make a mistake that gives you an extra trick, some describe it as a ‚present‘. Accordingly, a really big mistake would be like Christmas. This one, like the best presents, was a total surprise to declarer, although he and his partner did work hard in the bidding to deserve it. It is a true story.

Playing in a pairs tournament, North picked up this hand: 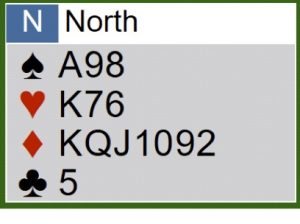 South was the dealer. He opened 1♥. West then doubled for takeout showing 11+ high card points and at least 3 cards in the other suits.

With a fit in hearts, 13 high card points, a singleton and only 6 losers, North knew he and partner definitely had enough to make 4♥. However, he decided not to rush there just yet.

Instead he made a splinter bid of 4♣. Although this bid took up bidding space, it nicely showed a singleton or void in clubs, confirmed the game, and allowed exploration for a slam should South have a strong hand. But slam seemed unlikely given West’s takeout double.

After East passed, what happened next was a shock to North. South bid 5♣!

Could 5♣ be some sort of Italian cue-bid showing first or second round control? If so then he could see they had controls in all the suits. But it was too late now for Blackwood to check for aces.

He could see his choice was to bid either 5♥ or 6♥. If partner had the ♥AQ, ♦A and ♣A, then even 7♥ would be on. More realistically partner only needed to have two aces for 6♥ so North opted for that. Which West then doubled confidently.

So, at the end of the auction, the bidding had gone as follows: 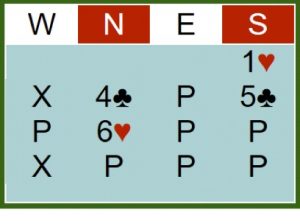 North felt a little sick when he saw West lead the ♥A.

West was happy though, well wouldn’t you if you held three Aces in your hand and the opponents bid a slam? West expected to score 500 by getting declarer 2 down vulnerable doubled and to move onto the next table wondering just why opponents thought they could bid this stuff and get away unpunished.

He only had to decide which ace to lead for the second trick. Should it be the ♦A or the ♣A? Being understandably confused by North-South’s club bids he opted for the unbid suit and lead the ♦A.

Unfortunately, this turned out to be a real Christmas present for South because he had no diamonds at all. After ruffing the ♦A he then drew trumps and threw away all the losing clubs and the losing spade in his hand on the long and established diamond suit in dummy. 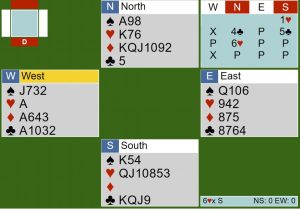 Wham! North reflected that South had wholly „given his heart“ with those bids. Maybe his hand shape should be known from now on as a „George Michael“. Interesting also to see that South’s hand had only 12 high card points of which half, the club honours, were actually not used and thrown away.

West wished he had lead the ♣A instead for the second trick to get the contract down. It seemed so unfair, when he actually had more points than declarer!

South maybe unaware of his luck commented to North, „“I was willing to redouble basing on our strengths in clubs and hearts, but was not sure if you have the ♠A, which you had.“