You could say of my American partner that he is “a woman’s man” in that he usually has a female partner even if he occasionally makes inappropriate remarks.  An excellent player I guess I am honoured that he partners me off and on the 10 years we’ve been playing online bridge. I have never met him face to face but witnessing his chat messages makes me suspect he is the sort that ladies might say “was not safe in taxis”.

Partnering him last week I picked up this hand with these nice red suits: 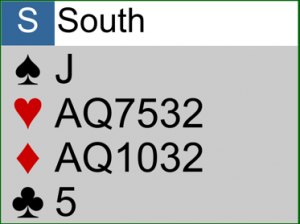 I thought of the tip “6-5 = Stay Alive”, i.e. keep on bidding! With a major and minor suit I was pleased it was my 6 card suit that was the major so I could bid it first to make things clear to partner. The other way round 5-6, when I would bid the longer minor suit first, partner might not believe I had a 5 card major too.

The auction went as follows: 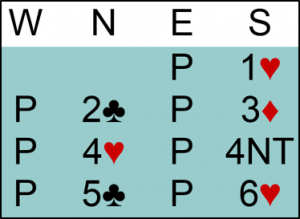 We play Blackwood 1430 so North showed 1 Ace with the 5♣ bid. My hand had 4 losers and partner’s 2 level response promised 10+ points so a slam looked like a good bet.  West lead the ♠9 and I saw this was what I had to work with to make 12 tricks: 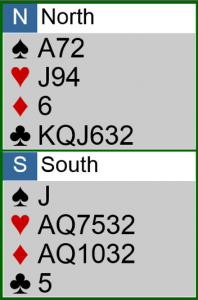 My plan, such it was, went as follows:

It sort of worked:

My plans to finesse the ♥K did not look too good now the ♥Q was gone. This was the hand at this stage: 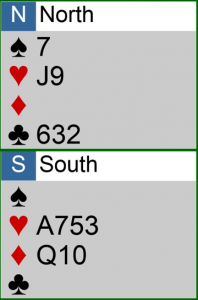 Thinking “it’s alright, it’s okay I’ll live to see another day” I lead the ♦10 and ruffed with the ♥9 on the table. Wonder of wonders the ♦K fell from West, making my ♦Q high.

Hoping I’d be “stayin’ alive” I then lead the ♥J from the table. So pleased to see it win the trick and nicely collect the ♥10 from West as well.

From then on it was easy to ruff a club in hand, play the ♥A to pick up Easts bare ♥K and claim the last 3 tricks with the last two trumps and the ♦Q. 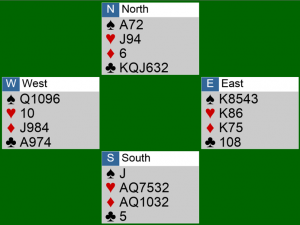 Partner, who never gives praise, was moved to say “nice play”. And to a man as well. And amused when I confessed I did it with a two beer handicap. (Well it was Friday evening.) But he did not understand when I mentioned drinking a non-alcoholic beer as well “Why??? That’s like kissing your sister”. Oh dear.

I wondered but saw later it would have done East no good to cover the ♥J. Then his remaining trump the 6 would have been smaller than my 7. And if earlier he ruffs with 6 instead of the ♥8 then I can safely over-ruff with the 7 and keep the ♥Q.